The Return of The Policast! 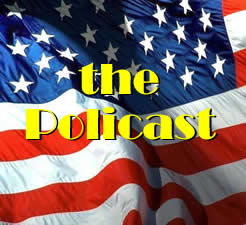 Today marks the official premiere of the second season of The Policast, a political affairs podcast that members of our department help co-host. Episodes are available from iTunes U, where you can download individual episodes or subscribe to get new installments as they’re produced. (If you don’t have the iTunes software, you can download it for free.)

We first did this back in the fall of 2008 during the Obama vs. McCain presidential campaign and the Franken vs. Coleman campaign in Minnesota for the U.S. Senate. “We” being Stacey Hunter Hecht (chair, Bethel’s Political Science department; regular contributor to the weekly civic affairs program Almanac on Twin Cities Public Television), my frequent partner in podcasting crime Sam Mulberry (my fellow coordinator for Bethel’s Christianity and Western Culture program and an inveterate listener to podcasts by Tony Kornheiser, Bill Simmons, and others), and me (Chris Gehrz). Stacey’s on sabbatical this spring, so Prof. Chris Moore, our resident international relations specialist, will be serving as our in-house expert on the Obama vs. TBD presidential campaign and other political matters. (Sam produces the podcast, and I chiefly play the role of moderator/interviewer.)

We talk more about our goals for the podcast in general and this spring’s run of episodes in particular on the 1st episode, but in short, we’d like to do at least two things:

This spring we expect to release episodes occasionally (no more than once every two weeks) and focus less on recapping events of recent days than on larger themes: foreign and domestic policy debates, the role of money in political campaigns, and the changing nature of media, to name but a few that have come to mind already.

For our first episode, we’re looking at the system of primaries and caucuses that American political parties now use to determine their presidential nominees. Chris, Sam, and I talk about the evolution of that system, alternatives to it around the world, its strengths and weaknesses, and the kinds of candidates (and, therefore, presidents) it tends to favor or produce. There’s also a brief interview with one of the many Bethel students who took part in Minnesota’s recent caucus meetings.

As we release new episodes, we’ll post brief announcements at this blog.

Cross-posted at The Pietist Schoolman

One thought on “The Return of The Policast!”