“Wounded and Healed”: A CWC Benediction

Our colleague Sam Mulberry offered these words on Monday and Tuesday, as a benediction for the last meeting of the fall in GES130 Christianity and Western Culture (CWC). May they bless and challenge you as you continue your own education…

You made it to the end of CWC. There are a lot of different reactions to that. Some of you are happy to have got the grade you wanted and be done. Some are just happy to be done. Period. Some of you are watching the clock, wondering how long until this is over.

And then there are some of you — maybe only a small few of you — who were maybe really impacted or affected by what we have done together here. Maybe some people who have at least part of them who don’t want to see this end.

For those of you in the first group… It is OK: we are almost done. I won’t talk for long. Just keep watching the clock. Soon you will have the rest of your life to celebrate not being in CWC.

But for those of you in the second group — who really found themselves connecting to something in this course — know that you are among friends and kindred spirits. Eighteen years ago — half my life ago — I sat right here in this room and felt a little sad that it was over. Eighteen years and thirty-one semesters later, I still feel sad. Why?

Let me read to you one of my favorite stories in all of Scripture… in all of literature, really. It comes from the book of Genesis: 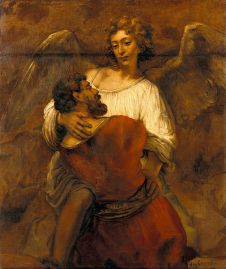 The same night he arose and took his two wives, his two maids, and his eleven children, and crossed the ford of the Jabbok. He took them and sent them across the stream, and likewise everything that he had. And Jacob was left alone; and a man wrestled with him until the breaking of the day. When the man saw that he did not prevail against Jacob, he touched the hollow of his thigh; and Jacob’s thigh was put out of joint as he wrestled with him. Then he said, “Let me go, for the day is breaking.” But Jacob said, “I will not let you go, unless you bless me.” And he said to him, “What is your name?” And he said, “Jacob.” Then he said, “Your name shall no more be called Jacob, but Israel, for you have striven with God and with men, and have prevailed.” Then Jacob asked him, “Tell me, I pray, your name.” But he said, “Why is it that you ask my name?” And there he blessed him. So Jacob called the name of the place Peni′el, saying, “For I have seen God face to face, and yet my life is preserved.” The sun rose upon him as he passed Penu′el, limping because of his thigh. (Genesis 32:22-31, RSV)

What does this have to do with anything?

Throughout this course, we’ve tried to argue that God reveals himself to us through our stories — both our individual stories and our collective story. In this course, we have examined part — just a sliver, really — of this story. And as we’ve experienced this story of some of the people of God in history — their lives, their ideas, their flaws, and their faith — I hope and pray that at moments you have encountered God, in the people you’ve studied and the people you’ve studied with. And like Jacob on the shores of the Jabbok River, you’ve probably realized that some of these encounters are difficult and challenging things. Most good educational and religious experiences are. Most things worth investing your life in are.

But there are two things, I think, to learn from Jacob’s story as we approach our own wrestling matches with God and those difficult moments when we look at God face to face.

I hope that we can pay attention to these wounds and scars from our education and our experiences. If you find yourself affected deeply by history, philosophy, political science, theology, or literature, make sure to chase those feelings down. (Or as much as you can chase them down with a limp.) Go find professors and other students who have been affected and wounded in similar ways and know that you are home.

The second lesson from Jacob’s late-night encounter with God is that Jacob took the time to recognize that the place where this wrestling match happened was holy ground.  He names the place Peni’el, which means “the face of God.” To him it was holy ground.

Maybe it’s a sign that I’ve been involved with CWC for too long, but at the end of each semester I can’t help but think of the thousands of people — students, professors, and TAs — who have met in this room over the last twenty-eight years to read, and to listen, and to learn… To encounter God, to wrestle with God, and maybe — just maybe — see the face of God. For me, this place is holy ground.

So as each semester ends, I feel a bit sad… Sad that this time that we have together is over.

Cross-posted at The Pietist Schoolman

One thought on ““Wounded and Healed”: A CWC Benediction”